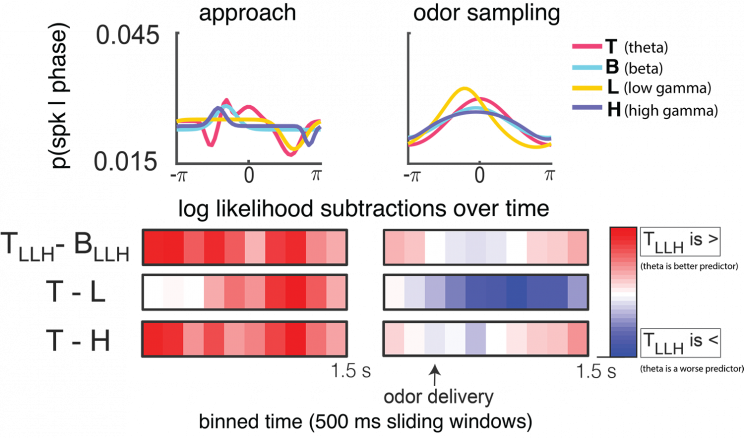 Graduate student Pamela Rivière used her newly developed statistical modeling methods to characterize the dynamic engagement of CA1 interneurons in multiple rhythmic circuits at Cosyne this year. In this example, rats are trained to associate an odor cue with an outcome (rewarded or not rewarded) depending upon the context in which the odor is presented. The figure depicts an interneuron with activity that is initially best predicted by the phase of a 15-35Hz beta rhythm and a 65-90Hz high gamma rhythm and later best predicted by the phase of a 35-55Hz low gamma rhythm. This suggests that there are rapidly changing influences upon CA1 interneuron spiking activity. In contrast, when rats approach odor ports where odors are delivered but have not yet sampled the odors, interneuron spike timing is best predicted by a 4-12Hz theta rhythm. Pam is helping us understand the incredible flexibility of the hippocampal network!